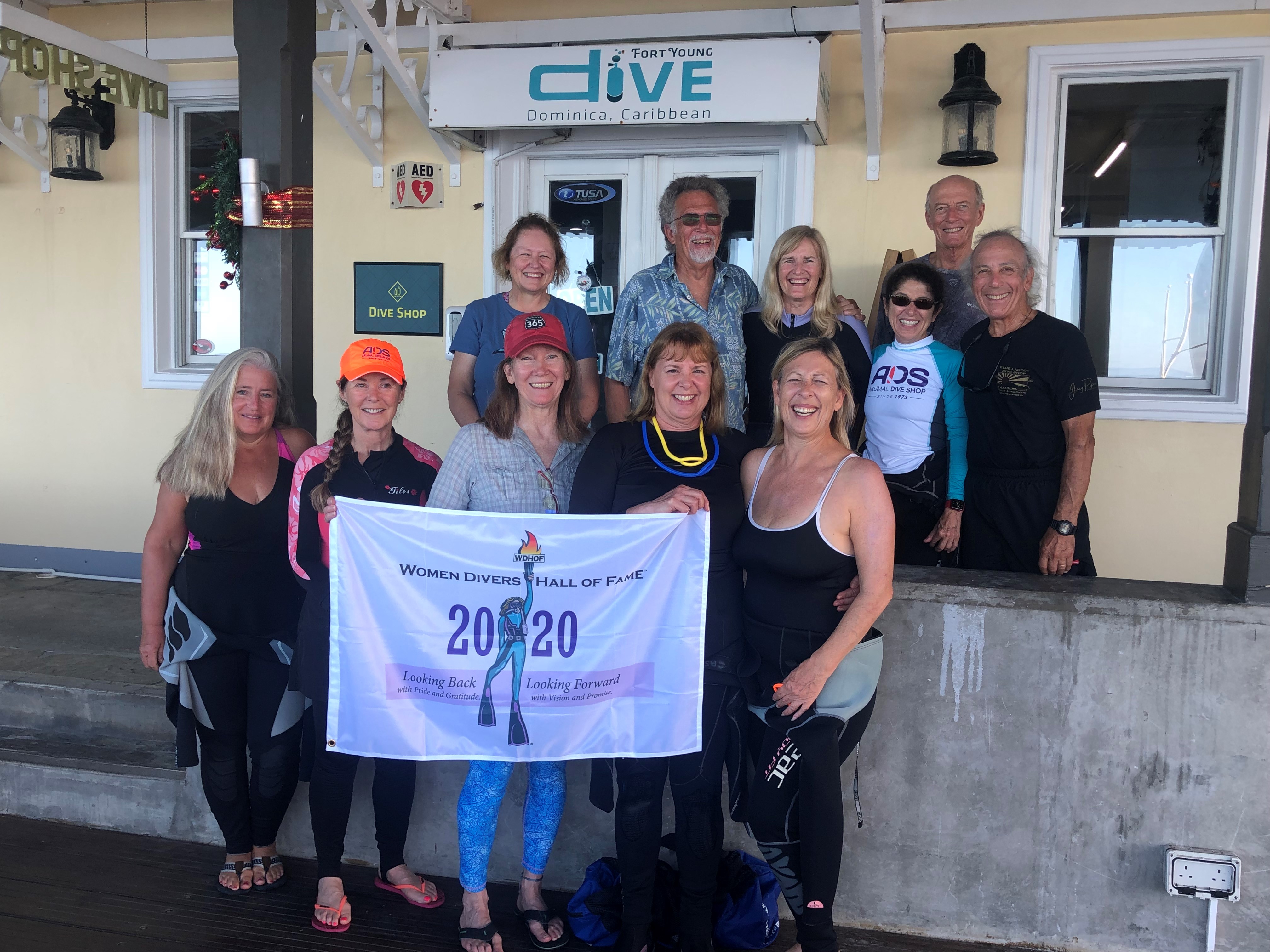 WDHOF Dive Trip to Dominica Enjoyed by All

Well, it took a while, 20 months to be exact, but finally part one of the initial April 2020 WDHOF trip to Dominica was on the island as of December 4, 2021. Our group shrunk from its original 18 members to only 11 as a result of COVID concerns and travel complications, but those of us that made it had a really great time.

Dominica is a one of the poorest islands in the Caribbean, with a population of between 17,000 and 20,000 people, depending on who you ask. It is a mountainous country, with nine active volcanos, though none have erupted in recent years. The winding roads are narrow. With most of the topsoil stripped off by hurricanes, the island is now shifting from an agricultural focus and trying to build an economy centered on tourism and diving. As such, they are very serious about adhering to COVID precautions. We were tested before we left the U.S., when we got to Dominica, and again before we left. Everyone wore masks and our temperatures were checked on a regular basis, along with a reminder to use the sanitizing gel. All of the precautions were perfect for me!

The big highlight of our trip was to snorkel with sperm whales. We had a permit that allowed us to go out for two days, Monday and Tuesday. Only small groups were allowed into the water at a time, three participants and the guide. Everyone understood that the success of the trips was dependent on Mother Nature and the willingness of the whales to show up and engage. The first group on Monday experienced rough waves, plus we were competing with other boats also wanting to engage with the animals. There was some hard swimming involved, as we had to swim to the whales, not just get dropped off next to them. Not everyone was successful, but we all did see the animals swimming on the surface of the water. The second day’s crew was more successful as the weather was clearer and calmer, there were fewer boats competing and the animals themselves decided to come in and check out our snorkelers. John Reed, husband of Sherry Reed, joined us on the trip and got some wonderful photos and videos.

The other big attraction was the diving! Staying at the Fort Young Hotel gave us access to an onsite dive shop as well as prompt pick-up service from the Dive Dominica boat. The morning routine quickly became breakfast at 7am, meet in front of the Fort Young dive shop by 8 to collect our dive gear and get on the boat. Off for a morning of two tank dives, back for lunch and then either afternoon exploring or hanging out by the pool, where we enjoyed pina coladas or other adult beverages.

We were treated to drift dives, wall dives and beautiful underwater scenery. Shirley Pomponi, our resident Queen of the Sponges, was in her glory. She said she had never seen such an abundance and diversity of sponges in one place and neither had the rest of us. A favorite of the dive sites was called Champagne. It was so named because of the tiny bubbles that could be seen escaping from the volcanic thermal vents running underneath the dive site.

You remember that I mentioned the nine active volcanos on the island? You could feel the heat coming from the depressions and we were all warned not to put our hands in the holes. The last dive of the trip was a night dive off the pier for the Fort Young Hotel. It was a beautiful night and we were treated to sunken cannons (it was a fort!), a 6-foot snake eel, batfish, slipper lobster, porcupinefish, octopus, spiny lobster, fireworm, lionfish and a few other creatures.

When not out diving we enjoyed afternoon excursions. The first one was to Titou Gorge and Trafalgar Falls. Titou Gorge is a popular swimming location. Wearing swim vests or wetsuits, participants waded and swam up the narrow gorge to a waterfall and swimming hole. This site was also one of the filming locations for the  Pirates of the Caribbean: Dead Man’s Chest movie. The next stop, Morne Trois Pitons National Park, was 15 minutes away by van. The Trafalgar Falls are famous twin waterfalls just a 15-minute walk from the Visitor’s Center on a paved trail, which led to a viewing platform.

On Friday, once we had received negative results on our antigen tests for the flight home and finished trying to get our gear as dry as possible for the required packing for the return, we headed to a hot  springs called Screw’s Sulphur Spa. (Screw is the name of the owner.) This natural sulphur-infused thermally heated water, collected in a man-made pool, was rustic and very relaxing. There was also some wonderful mineral mud that most of us tried. The conclusion? Our skin did feel better for the effort. A quick wash under the freshwater waterfall nearby and it was time to get changed and onto the van for our final stop of the night.

All during the week we had been taken care of by the Dive Fort Young staff (Brad and Francesca) and the Dive Dominica boat crew (Stinger, Kevin and Branton). Stinger was the captain of the boat and it was arranged that we would enjoy our final dinner on the island at Stinger’s Pub in Roseau. It was not a very big establishment (the 11 of us filled it up) but Stinger closed it down for us, his special guests, and was about as proud as a man could be of his business.  We enjoyed chicken, fish, vegetables and rice. Adult beverages were consumed. Salsa dancing was enjoyed by some of the participants and we were treated to a poetry reading by one of the locals. Stinger spoke on behalf of all the islanders when he thanked us profusely for choosing to come to Dominica and wanted to know when we would be back! Fair to say that a good time was had by all.

The travel home, which started with the 5am van to the airport, was uneventful. Now comes the fun of sorting and sharing all those pictures and videos we took, and sharing what we learned with the next WDHOF group heading to Dominica January 1.

Special thanks also, to Cheryl Patterson, WDHOF Associate and Deep Blue Adventures travel agent extraordinaire, for all she did to make sure these two trips did happen!.