15th Anniversary Dive Trip to Laguna Beach Resort featuring elegant, tropical waterfront bungalows was the location for a fun-filled week of diving and enjoying the camaraderie of WDHOF Members, Associates, family and friends. 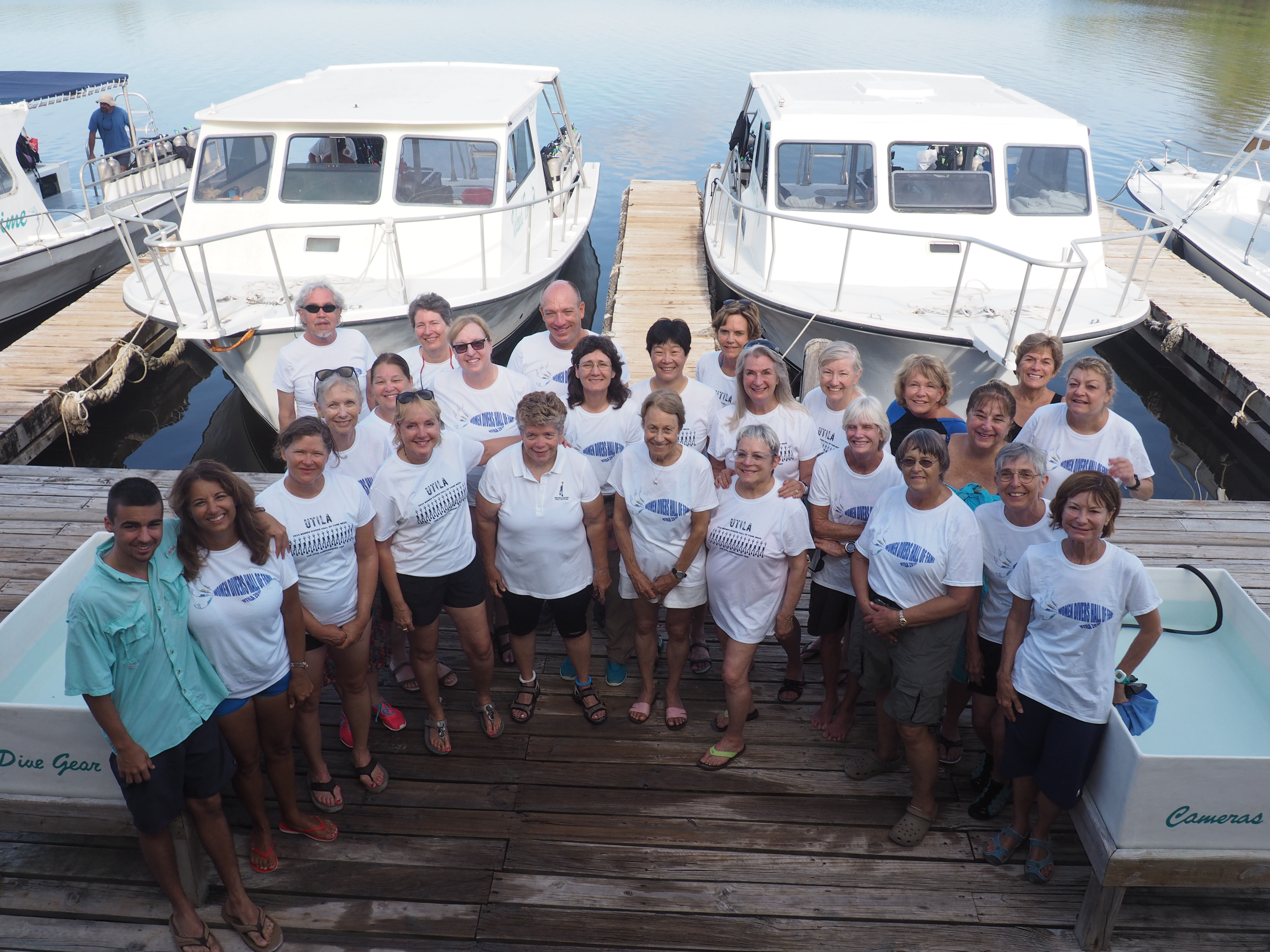 Take a high-powered group of female divers, mix with seawater, and what do you get?

The Wet, Wonderful, and Winning 15th Anniversary Trip to Utila

For 15th anniversaries, crystal is the traditional gift. But for the sea sisters of the Women Divers Hall of Fame, water is the preferred element. Make that seawater.

Twenty-eight divers (WDHOF members, Associate Members, and guests, and yes, some males!) joined in the wet and wonderful celebration, spending 8 days on a small private cay at Laguna Beach Resort. Mix in 4 boat dives a day plus night dives, unlimited dives on the excellent house reef, dolphin and whale shark searches and you can guess the rest: wet hair for a week and new sea sisters for life.

But diving is only part of the WDHOF winning formula. In addition to having a ‘fintastic’ diving holiday while renewing friendships and meeting new dive buddies, the participating divers helped raise funds for WDHOF scholarships and training grants. WDHOF divers also met with Utila’s ambitious new mayor, Troy Bodden Sr., who is steering Utila into a more sustainable future. That’s a Win-Win-Win all around: for the participating divers, for the WDHOF scholarship and training grants program, and for Utila.

Trying to delight this very special group of divers is a challenge!  WDHOF started its dive trip program in 2010 and has averaged a trip a year since then. WDHOF’s 15th anniversary year started off with a trip to Cuba and culminated in August with the Utila adventure. By foregoing commissions and obtaining special rates and upgrades, the trips raised significant funds for WDHOF scholarships and training grants.

Utila’s Laguna Beach Resort has long been the location of one of Margo Peyton’s popular Kids Sea Camp programs, the world’s largest family dive program, with 1,600 participants annually! She is our member who facilitated this trip!

It was great fun diving under the auspices of Mayor Troy Bodden Sr., an islander intimate with the traditions of commercial fishing who knows that the days of fishing as people have done for generations is over. “Overfishing is the biggest threat to our reefs, altering biodiversity and sustainability,” and he actively helps fisherman and their families learn new ways to live.

WDHOF members also took advantage of a free day to tool around the island in go-carts, sight-see, climb the highest point in Utila and photograph wildlife.  We were welcomed warmly by the people, a rich mix ranging from early Payan Indians to Spanish explorers, African slaves, British colonists, and Caymanian settlers. Pirates also feature in local lore. Island residents are native English speakers with a Calypso lilt and Caribbean vocabulary. Utila is one of the three Bay Islands of Honduras.