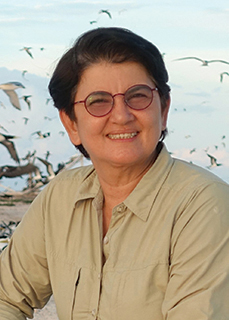 Angelique Songco’s title is Protected Area Superintendent of Tubbataha Reefs Natural Park, but she is better known as “Mama Ranger.” She was hired as Tubbataha park manager in 2001. At age 50, she finished her Master’s degree in Environment, Development and Policy from the University of Sussex, England. Angelique was named Hero of the Environment by WWF-Philippines twice. Under her leadership, Tubbataha won the Platinum Global Ocean Refuge Award, now known as Blue Parks, and was named one of three best-managed, large, no-take, marine protected areas in the world. She received the KfW-Bernhard-Grzimek-Preis 2019 for her work in biodiversity conservation.