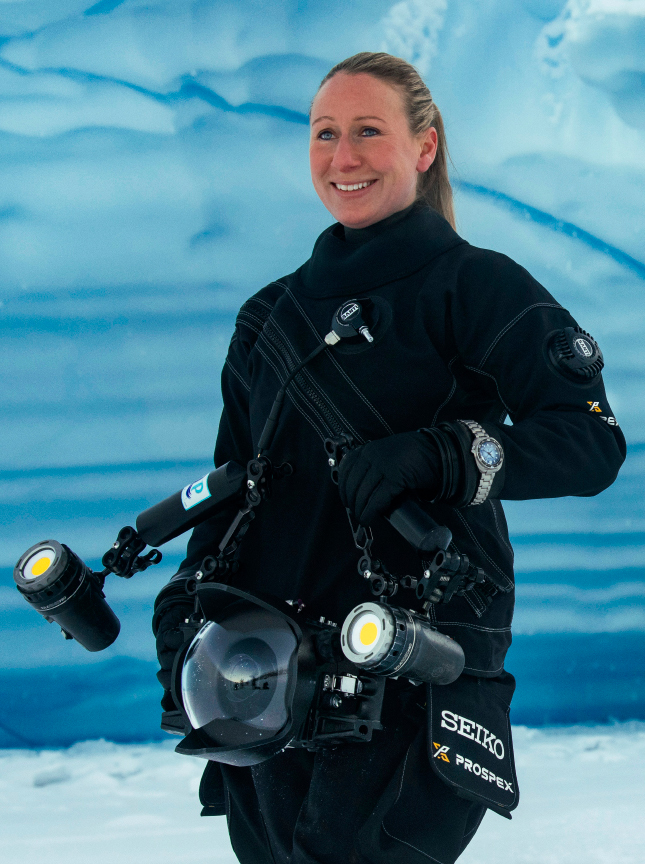 Becky is a 5-time Emmy award winning underwater cameraman and photographer who’s work appears on major networks including National Geographic, Discovery Channel and Red Bull. She is co-owner of Liquid Productions Inc. and specializes in capturing images in extreme underwater environments including caves, under ice and deep shipwrecks. Her projects have taken her all over the world from the Arctic to Antarctic and many exciting locations in between. Recently Becky organized and lead a successful expedition to be one of only a handful of people to ever dive inside a Glacier. She’s filmed new wrecks, cave exploration and even diving cage-less with great white sharks. Her experience working in remote locations around the world and artistically capturing extreme environments has earned her a reputation of being able to produce quality work in tough situations. Her biggest passion is shooting haunting images of deep shipwrecks in the Great Lakes. She combines her artistic style with powerful stories of tragedy, mystery and survival to ignite the viewers imagination. She’s constantly pushing the limits of technology and trying new creative techniques to capture the beauty of the underwater world. In the past few years she's also been working on producing high quality 3D photogrammetry models which showcases shipwrecks in a new way to divers and non-divers. She’s a frequent contributor to several Dive Magazines and her photography has been used in books, museums, and advertising. Becky has been actively diving for 27 years and technical diving for 23 of them. She has been an Instructor for 2 decades and is currently an active TDI Mixed Gas Rebreather Instructor. Becky has a degree from the University of Tampa in Journalism. In her spare time she’s participated in dozens of exploration projects around the world which earned her a place as a Fellow in the Explorers Club and in 2013 she was inducted into the Women Divers Hall of Fame. She leads expeditions all over the world to capture unique images that inspire others to explore our planet! www.LiquidProductions.com