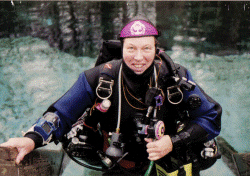 Since 1961 Evelyn has been diving the wrecks off the East Coast. She was the first woman to dive the Andrea Doria, one of the first women to use mixed gasses in diving, and also launched her own custom wet suit company when none could be found commercially. After the untimely death of her husband in 1982 she continued to expand Dudas’ Diving Duds into a full service dive facility and raise 4 children on her own. She is an active wreck and cave diver who continues to instruct to this day.