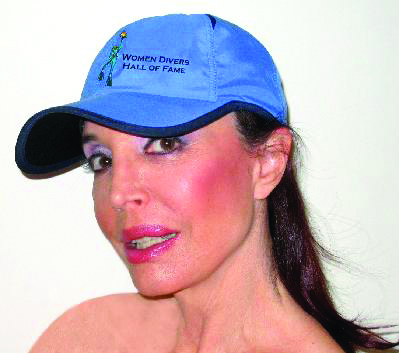 Hillary Viders is an internationally acclaimed speaker, educator and author, with an unusually extensive range of interests and expertise. Over the past 40 years, her contributions to diving have spanned almost every major sector of the industry: arts, science, undersea and hyperbaric medicine, dive training and education, dive travel, dive media, safety, and undersea exploration. Viders co-founded the Women Divers Hall of Fame in 2000, and served as Chairman of the WDHOF Board of Directors for 9 years. She was also instrumental in launching the WDHOF Scholarship Program with her $2500 annual award in Marine Conservation. Viders has been a scuba diving instructor for NAUI and the National Association of Search and Rescue, and her diving specialties include marine science and conservation, undersea and hyperbaric medicine, Dive Accident Management and historic shipwreck exploration. Viders has published over 2,200 articles in 48 publications internationally, some of which have been translated into as many as six languages. She has also written numerous academic papers, video scripts, training manuals, books, such as Marine Conservation for the 21st Century and chapters in books, such as Women and Pressure. Viders has served as an Adjunct Professor in the Environmental Science Department of the NYU Graduate School of Continuing Education. Viders is a member of the Explorers Club as has served as President of Academy of Underwater Arts and Sciences. She has won over numerous awards in diving. She is an Honoree in the United Nations Environment Programme’s “Who’s Who of Women in the Environment,” and is the only diver to receive the prestigious Presidential “Take Pride in America” award (1993) presented by President Bill Clinton for her work in undersea conservation. She was also the first woman to receive the DAN (Divers Alert Network)/Rolex “Diver of the Year” Award for Diving Safety. She Has 2 NAUI Awards for Outstanding Service, the SSI Platinum Pro Award, the Beneath the Sea Diver of the Year Award and the Beneath the Sea Medal of Excellence. In 2002, Viders was cited in Skin Diver Magazine (“Milestones Column”) as one of the most influential women in diving. She was also featured on ABC television’s “Eye Witness News” and has been interviewed and quoted in numerous publications including USA Today, The World and I, and National Geographic Magazine. A recognized pioneer in diving ecotourism, Hillary created many of the first manuals and guidelines for green dive travel and underwater cleanups. In 1990, she created Environmental Horizons, the first accredited environmental dive program in the scuba industry for NAUI, and she has served on the PADI Project Aware Board of Advisors. Viders has been a featured speaker at over four dozen conferences and seminars, including the Annual Undersea and Hyperbaric Medical Society Meeting and the International Ecotourism Conferences in Venezuela (where she was a field leader). She also produced the first marine conservation videos for divers and for children for NOAA and NAUI. Viders has taught all levels of scuba, but specialized in Emergency Oxygen and Field Management of Diving Accidents, which she taught to professional dive teams, medical officers, FBI, Police and Fire Departments and scientists at venues such as Woods Hole Oceanographic Institute. She is an EMT and trained in hyperbaric chamber operations. During her career, Hillary served as a Member of numerous BODs and she has consulted to many NGOs and government organizations on diving and conservation issues.